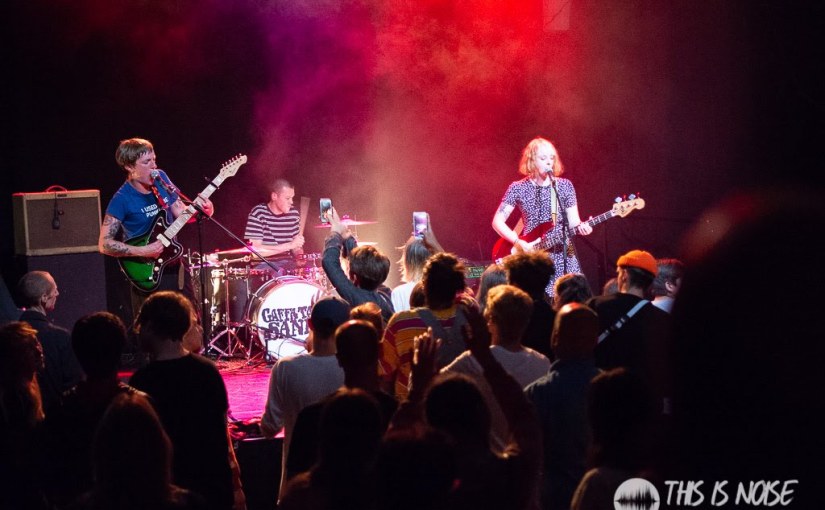 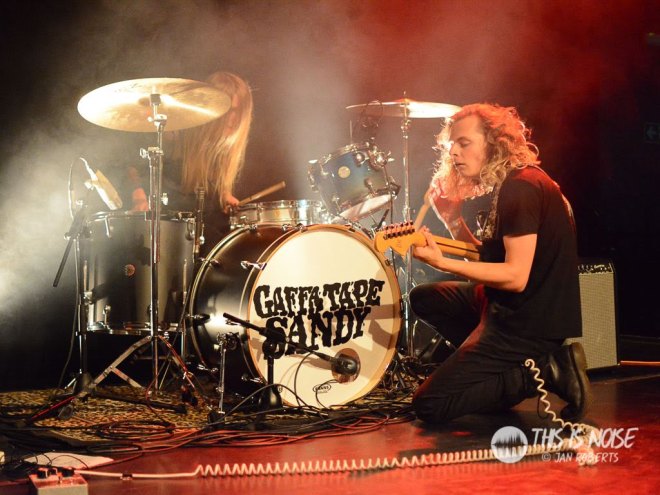 No messing, straight on, no chat, plug in and play. Very punk, you like us or you don’t….

You don’t go to see Kulk you experience Kulk. A visceral onslaught of noise and movement, all uncontrolled angular jerky energy laid out there for you to absorb or reject. Thoms wall of guitar sound propelled by Jade’s pounding attacking rhythmic drumming produces something so raw and fresh, they are a highlight of any evening.

The Norwich Arts Centre gave a rare opportunity to see the band on a larger stage than normal. One where Thom was able to give full reign to the inner demon and occupy the whole stage and at times the uncontrolled airspace above it. In smaller clubs and pubs the experience is similar to seeing a tiger in a cage, restrained and contained; unable to fully express the essence of their being.

This is raw energy that needs to be experienced more than once and I look forward to seeing them more often, on bigger platforms, further up the bill.

Local band Marigolds presented up their dreamy indie guitar sounds of summer, playing crowd favourites Surf Girl and their 2018 release, Slept Out. Their fresh sound and uplifting vocals a marked contrast to openers Kulk. Apart from some tuning difficulties they delivered a promising set of fresh introspective tales on young modern life, climaxing with their new drummer leaping out of his seat and end the set with a crescendo of smashing cymbals, leaving everyone nicely set up for headliners Gaffer Tape Sandy.

It is hard to believe that a) GTS were nervous ahead of this gig and b) for a well-travelled band this was their first foray to Norwich as the headline band.

Nerves aside, they launched into their set with energy and verve, guitarist Kim cavorting around the stage, rolling, twisting, stretching and lunging his way through the numbers. Alternately swapping vocal lead with bassist Catherine, this energetic trio served up a menu of memorable tunes from their new single Meathead, the oh so heavy Transylvania, Manager and Collarbones from 2017 EP Spring Killing, to a new work in progress currently titled So Dry. This was a top-level performance with their experience of playing to larger audiences on big occasions evident in their presence and delivery of each song. These are utterly infectious, laden with beautiful melodies surrounded with guitar smashing thrashing riffs and pounding drum passages that you just don’t want to end. 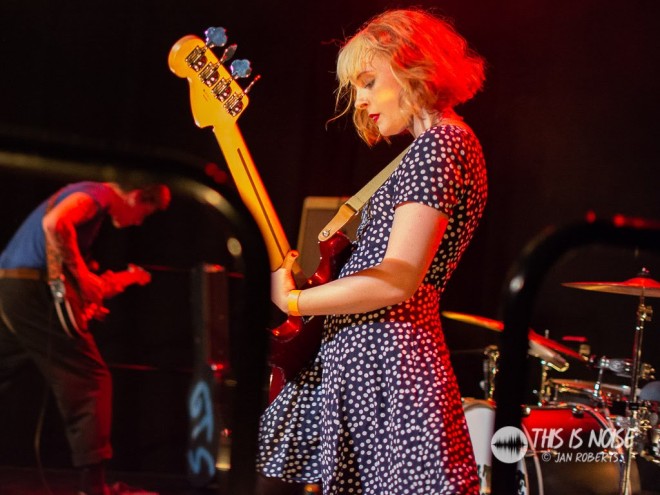 Audience participation is always high at a GTS gig, and this was no exception with the mosh pit in full swing. For the loyal fans who travelled up from Suffolk to see them the loudest roars were saved for the anthemic Beehive and after much deliberation and teasing GTS launched into what is their signature tune to close out a perfect evening.

To paraphrase NME, this was 60 minutes of pure thunder and they just may have won some new fans up Norwich way.

A final mention goes out to the Norwich Arts Centre techies who put on an imaginative light show adding to the spectacle for each and every band not just the headliner; a good sound mix and they kept the smoke machine to a minimum, just enough for atmosphere (and the occasional drummer disappearance).