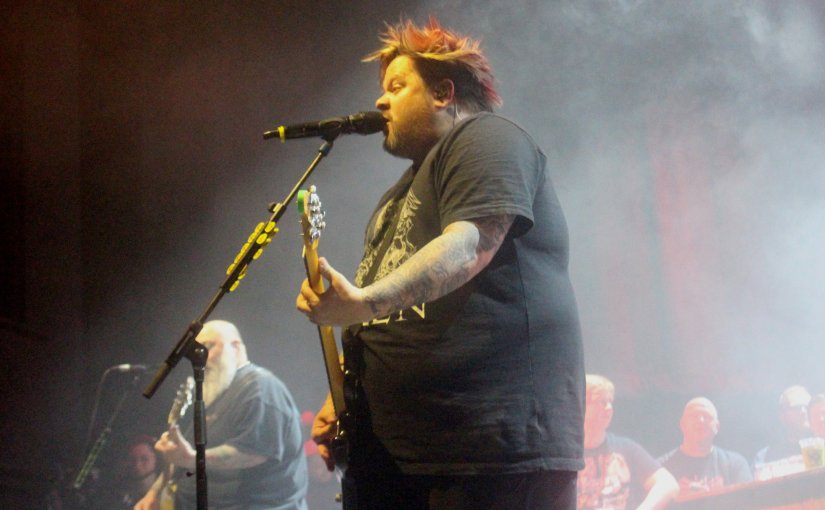 Nostalgia at it’s finest as Bowling for soup made their return to the UEA for a very entertianing and high tempo gig as the American rock band provided the crowd with a two-hour performance with support from Aqua Bats and Army of Freshmen.

The night was kicked off by Army of Freshman, a rock band from Ventura, California. Due to the volumes of people turning up at the venue, it took a while for everyone to filter in meaning that some people missed out on part of their set.

Despite this, the six strong line-up brought a set that was packed with high levels of energy resulting in a fair amount of the audience dancing along.

Up next was The Aquabats, one of the liveliest bands to ever have graced the stages of the LCR.

Their set had everything from matching outfits and swimming caps to inflatable sharks, donuts and pizza – of which a member of the crowd was invited to surf on over the audience.

The five piece rock band was something else, cracking jokes throughout their set whilst having a ‘super rad’ time on stage.

Last but not least Bowling For Soup took to the stage. They proceeded to perform their album ‘Drunk Enough to Dance’ in its entirety in celebration of it recently hitting its 15th anniversary.

They brought with them their infectious humour, making frequent playful jibes about their weight and entertaining the audience with stories and memories from their many years as a band.

Halfway through the night they announced the ‘countdown to 1985’ with a digital timer that got the crowd very excited with what was set to be an amazing finale for fans of the band.

Before the show came to a close, lead singer Jaret Reddick teased the audience by asking if anyone knew that the band had co-wrote and sang the theme for Disney’s Phineas and Ferb, despite saying they weren’t going to play it.

The finale came as the band performed their incredibly popular song ‘1985’ which sent the crowd wild – ending the night on a high in what was a stellar performance from Bowling For Soup.